To respect and honor that must always be offered to our illustrious ancestors, these masterpiece vineyards were given in 1966 by the teachers from the Faculty of Horticulture in Craiova, the name Banu Mărăcine. It is believed that, the first Romanian who saw foreign countries (year 1328), is the son of Andrei Mărăcine, true-born restless Oltenian who brought the fame of the Jiu and Olt, the Danube and the Carpathians to the Seine. It is said that he arrived at the court of King Philip of Valois, in whose service he put himself supporting him of the war that he had with the British. For his deeds of bravery and valor he was awarded the noble title of “Marquis of Ronsard”, hence the name “Banu Mărăcine.” 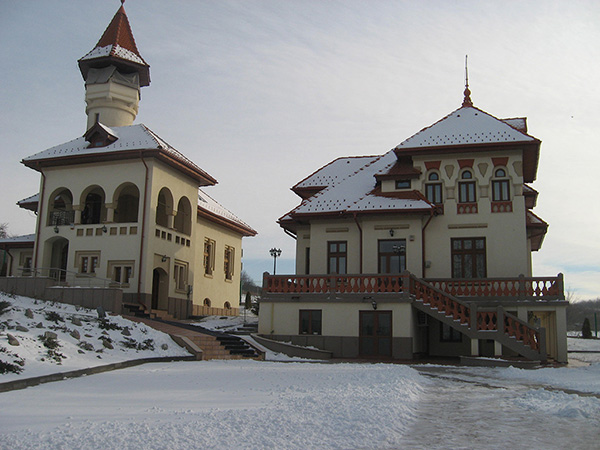 The Banu Mărăcine Didactic Station is located in the center of the vineyard of the same name, prized for its famous red, white and flavored wines, but also by the wonderful “ROUA PLAIULUI” that was presented in 1996 at the International Exhibition of Inventions in Geneva, where it was awarded the silver medal for its smoothness and refinement, but also for the technology that yields authenticity.

In 1975, the Didactic Experimental Craiova Station was founded, with an organization form assimilated to the IAS – (farms and sectors), having as main activity, the practical training of students, conducting research by teachers and the implementation of research results into production.
Between 1984-1990 by scraping the land, the Cave was built, being one of the largest in the country. Descending the cave’s stairs, one can find at the entrance a model of the vineyard. The trail is shaped like the letter L. The Cave has two entrances and a tunnel that connects the old and the new wine cellar. The Cave is where wine matures. Various wines are kept in oak barrels.
The second basement of the building is next: the cellar. The room has something magic in it. Here, the bottles are arranged on the shelves in a horizontal position. Each year after the harvest a number of bottles that are brought to aging are set. The shelves are numbered by categories. The earliest varieties date from 1970. The winery has 20 thousand bottles, of both wine and distilled beverages from peaches and plums.

Inside The Banu Mărăcine Didactic Station “Mircea Villa and Shed” are located previously known as the Negrescu Villas, a former mayor of Craiova in who built, a beautiful castle in honor of his son Mircea (1927) amidst the vineyards, whose construction reminds us of the famous Brâncovenesc style. Near the castle he built a cozy wine cellar, and above it, an imposing – by its grandeur and beauty – pavilion, from which you can admire the entire Banu Mărăcine amphitheater vineyard, offering Craiova a unique beauty.

“Mircea Villa and Shed” have been completely renovated and feature four single rooms and three double rooms, each with its own bathroom, conference room, terrace, cellar and kitchen.
For information on renting, please contact us by e-mail  ramonagiotoiu@yahoo.com or telephone: 0251/411746